Maggie Toulouse Oliver, New Mexico’s Secretary of State, outlines how states follow painstaking, transparent steps before and after each election to keep them reliable and secure.

Maggie Toulouse Oliver serves as New Mexico’s Secretary of State, a post the former county elections official has held since 2016. A graduate of the University of New Mexico, where she now is pursuing a PhD, Oliver has overseen elections at the local or state level for 15 years. Her electoral expertise includes previously serving as Elections Committee Co-Chair of the National Association of Secretaries of State.

Before appearing on a bipartisan panel on election integrity at the George W. Bush Institute in May, Oliver spoke about election safeguards with Christopher Walsh, Deputy Director of Freedom and Democracy at the Bush Institute, and William McKenzie, Senior Editorial Advisor at the Bush Institute. Oliver outlined how states follow painstaking, transparent steps before and after each election to keep them reliable and secure. She also offers ideas about engaging more voters in elections, including young citizens.

Let me start with this question that we have asked others during this series: What must a democracy deliver to keep itself healthy?

That’s a big question but I would say basically three things.

The second thing a democracy needs to deliver is the integrity of the process and ensuring one-person, one-vote.

But once those avenues have been exhausted, we move forward. And, if there are individuals who are trying to tamper with that process, they are held accountable so that does not happen again.

What should states do to get more people participating in and voting in elections? Here in Texas, some of our school board elections are lucky to get 5% of the electorate to turn out.

We had a similar situation in New Mexico and one thing we did to address low turnout in nonpartisan races was to consolidate our nonpartisan local races onto one ballot. Now, we have an election every November. As a voter, you know that is always the case.

We are living in a society where choice and convenience are so important to us as consumers. For that reason, when it comes to voting and providing government services, it is important to offer voters a variety of choices and convenience. So, offer voting by mail, voting from home, voting early. And offer consolidated election-day precincts so you can vote from anywhere in your county.

Some people say voting is a privilege, that we shouldn’t offer it to people on a gilded tray. No, but we need to acknowledge the realities of our society. We need to provide services in a way that folks are accustomed to receiving them.

Do you see voters responding to these kinds of reforms around the country? Is this heightening participation or not?

A little of both. I started running elections over 15 years ago. From then up to now, the public has responded very well when we have started making voting more convenient and accessible.

What we are tending to see across the board is people shifting their voting behavior. They are not waiting until the last minute or the last day. Primarily, voting early and in-person is what people in our state like.

What should secretaries of state be doing to increase voter engagement?

It's a conversation I am very involved in through the National Association of Secretaries of State. Most of us are the chief election officials in our states. We constantly share best practices and talk about ways to engage voters.

We also have had to change how we reach out. Yes, it’s meeting with civic groups, going to schools, and getting young people to vote. But it’s also about all of us being on social media. One big challenge is that we don’t have enough money to do everything we want to do.

What do you see in New Mexico and elsewhere in terms of getting young people to vote?

A lot of people are trying to figure that out. For example, you can vote in New Mexico in primaries if you are 17 now and will be 18 by the general election. We got close to passing a provision to letting 16- and 17-year-olds vote in school board elections. It ended up morphing into letting 17-year-olds vote in everything, including the regular local elections I mentioned.

We also have allowed 16- and 17-year-olds to pre-register and work at the polls. That has been successful. They may not be able to vote themselves, but they can help others vote. And they are primed to vote when they turn 18.

You have experience as well as a former county election official. What safeguards are in place at the local level to ensure the integrity of our elections?

The first thing is there are so many safeguards. Most people don’t know that. Their experience is they come to vote, put their machine in the ballot, vote, and leave. They don’t know the painstaking, transparent, bipartisan work that has occurred along the way. This is true in any polling location and jurisdiction in the country.

Any place ballots are being counted, we have chain-of-custody procedures so that we know at any point where ballots, voting machines, and ballot-on-demand systems have been. Every state ensures that tabulators have been programmed accurately. It’s called the logic-and-accuracy test.

In every jurisdiction in the nation, this is a public process. Candidates and parties are invited to attend. You watch ballots fed into the machine. You have a process where everyone can see the ballots are counted accurately. At the end, a seal or lock is put on the ballots, so, if that seal is broken, you will have evidence of tampering.

The first thing is there are so many safeguards. Most people don’t know that. Their experience is they come to vote, put their machine in the ballot, vote, and leave. They don’t know the painstaking, transparent, bipartisan work that has occurred along the way. This is true in any polling location and jurisdiction in the country.

This process is tedious, but it is soup-to-nuts. We do all this testing to make sure things are accurate before an election. We have painstaking processes to make sure everything is counted fairly and accurately. And, during the back end of the process, we have three levels of audits.

We have canvassing of an election, where we make sure all the votes are counted and the results add up. In New Mexico, we do that at the county and state level and then an independent auditor verifies the results. Then, we do a post-election audit to spot-check that results are accurate. A lot of states do a similar version of that.

So, these are time-tested procedures that are not made up on the spot?

Yes, these are time-tested.

Needless to say, there is sometimes a disconnect between what is legislated and what happens in the process. But we go back over the steps to tweak them, or I write an administrative rule as secretary of state, so that it is clear what the process is to follow.

We do come up with new ideas, but there is not a lot of reinventing the wheel. We share best practices about what works well.

Again, you once were a county official. How do local leaders strengthen elections?

You encourage people to participate and register to vote. You help spread the word about options that are available for voters. Even leaders and candidates don’t know all the ins-and-outs, but some want to really educate themselves about the process. They can say I have seen them doing XYZ. That is really beneficial.

And, as individuals, you can work at the polling place. You can understand for yourself the mechanics of the election process.

How do people get to work at the polls? Is it hard to get people to volunteer?

It is getting harder. But we have a citizen-run democracy, and we cannot conduct elections without citizen volunteers.

The fastest path to become a poll official is to contact your local election administrator. In my state, that is the county clerk. Call and say you want to be a poll worker. Keep calling if they don’t call back.

The task force was chaired by Brian Sandoval, a former Republican governor of Nevada. We worked with companies and organizations that have a civic bent or were interested in civic engagement. When it was created, we wanted to counter misinformation and disinformation that voters were receiving from foreign countries. We wanted our partners to get the correct information out to their companies, their customers, their constituencies. We wanted them to know about the information environment surrounding elections.

We all wished we had been able to come together sooner and had more opportunity to disseminate our report. We now see this as a long-term effort that USC is helping support.

I don’t ask this in a partisan sense, but what role do political parties play in strengthening a democracy?

But we have a citizen-run democracy, and we cannot conduct elections without citizen volunteers.

Democrats, for example, are focused on access to the ballot and protecting the right to vote. From my point of view, Republicans are focused on what they see as flaws in the election process.

They both are saying they are interested in the integrity of the election process. And both parties are identifying flaws in the system from their point of view. But both need to come back and acknowledge the system will never be 100 percent perfect. We need to strive towards perfection, but we are humans. So, acknowledge the flaws, but also acknowledge the system gets better every election we have so we don’t discourage people from participating.

In the eighth installment of Democracy Talks, we explore the struggle between democracy and authoritarianism and how partnerships are key to creating and sustaining freedom around the world. Read more.
Abraham Lincoln: A Poet of Democracy Who Inspired Freedom’s Spread
A Vibrant Culture Smooths a Transition to Democracy
We Need a Global Fight for Freedom
Democracy Makes the World More Secure and Prosperous
Strengthening America's Democracy
How to Reverse Central America’s Authoritarian Trends
When It Comes to Democratic Transitions, the Middle East Is a Desert
Be Patient with Central America's Faltering Transition to Democracy
Challenging Information Autocracies

A Vibrant Culture Smooths a Transition to Democracy on June 23, 2022

Chris Walsh, Deputy Director of Freedom and Democracy at the Bush Institute, discusses rebuilding trust in U.S. democracy in response to new poll findings, which report an overwhelming lack of confidence in the system.

Update on Russia's War on Ukraine by David J. Kramer 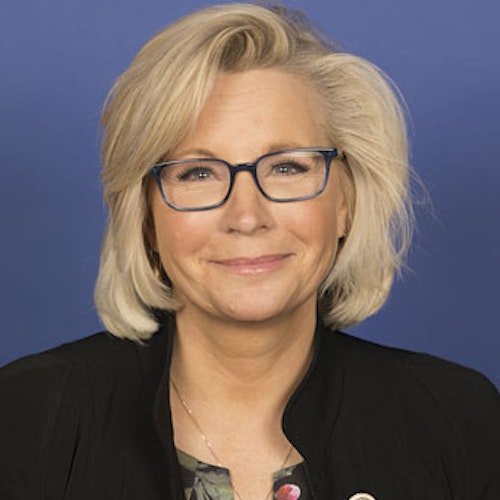 Strengthening America's Democracy Rep. Liz Cheney, R-Wyo., serves as Vice Chair of the House Select Committee to Investigate the January 6th Attack on the United States Capitol. In this Democracy Talks conversation, she explains why America should stand against the rise of anti-democratic forces around the world. Read the article 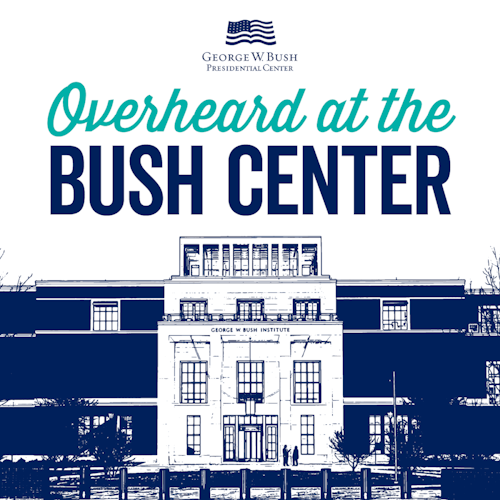 Overheard at the Bush Center — Restoring Trust in Our Elections On May 18, the Bush Institute and four partner organizations hosted Elections – A More Perfect Union. In this panel discussion, experts share how the integrity of elections is being protected in various states and conveying the threats currently facing election administration and workers. Listen and subscribe

Challenging Information Autocracies Hungarian social psychologist and political scientist Peter Kreko directs the Political Capital Institute in Budapest. He explains the recent rise of information autocracies and how autocrats use information instead of violence or oppression to control their people. Read the article