Makhothatso Matsela, a 41-year-old primary school teacher from Maseru, Lesotho, decided to get screened for cervical cancer because she was experiencing some  health challenges.

She was already living openly with HIV and sharing her status to encourage neighbors, members of her church, and fellow teachers at school to get tested and seek treatment if positive. But it took a conversation with a neighbor who is also a Village Health Worker to convince Makhothatso to go to the Senkatana clinic, to be checked out further.

Her story is not unusual in Lesotho, where more than 25% of women between the ages of 15 and 49 are living with HIV and are at increased risk of developing  cervical cancer. HIV makes them more susceptible to complications from the human papillomavirus (HPV), which can cause cervical cancer and genital warts.

Makhothatso had  genital warts that were removed previously, but irregular bleeding, and the prodding of her caring neighbor, sent her back for further examination. At the Senkatana clinic, she explained that she was HIV positive and already on antiretroviral therapy, but recognized the bleeding she was having was not normal. A cervical cancer screening detected abnormalities and she had precancerous lesions treated with thermocoagulation in September 2019. The bleeding and the pain went away.

“The health care workers at Senkatana are warm and welcoming,” Makhothatso said. “They are passionate about their work and treat their patients with care and also educate them about cervical cancer.”

The Senkatana clinic is operated by the Elizabeth Glaser Pediatric AIDS Foundation (EGPAF), an implementing partner of the U.S. President’s Emergency Plan for AIDS Relief (PEPFAR) as part of Go Further, a public-private partnership that aims to reduce new cervical cancer cases by 95% among women living with HIV in 12 sub-Saharan African countries. Together, the Go Further partners, including PEPFAR, the George W. Bush Institute, UNAIDS, Merck, and Roche, combine their strengths to advance women’s health.

Through Go Further and with the help of its implementing partners including EGPAF, PEPFAR helped scale up the cervical cancer prevention program to all districts in Lesotho in 2018. Since then, nearly 97,000 screenings have been conducted. EGPAF has worked with Lesotho’s Ministry of Health on cervical cancer prevention since 2013, but Go Further’s involvement has allowed the partners to sharpen their focus and provide more resources for cervical cancer detection and treatment by fully integrating cervical cancer screening and treatment into existing HIV services in places where women regularly collect their antiretroviral drugs, factory workplace programs, and outreach efforts to key populations.

Since her treatment, Makhothatso says she feels very healthy. She was advised to go for regular screening check-ups and return to the clinic sooner if she sees any abnormal bleeding, discharge, or pain.

But she wants to do more.

Makhothatso says that she feels called to educate other women in their community to get screened. She is now regularly talking to her neighbors, work colleagues, and family members about the importance of cervical cancer screening.

“I now feel empowered to talk about cervical cancer, and I encourage others to go for screening,” she said. “The cervical cancer services are highly important health services for women. We acknowledge our government and donors and all implementers for prioritizing women’s sexual and reproductive health. We are humbled, we feel honored and taken care of.”

Welcoming our newest neighbors on June 21, 2022

Holly Kuzmich, Executive Director of the Bush Institute, moderates a panel at Concordia's Annual Summit focused on PEPFAR’s 20 years of success and how partnerships play a role in advancing health, wellbeing, and equity in global development.

Cervical cancer is the most common cancer among women in Zambia, with an average rate nearly double the global average. Wanga Zulu, a 46-year-old Zambian actress and mother of five who was diagnosed with cervical cancer in 2014, now uses her platform and status as a survivor to raise awareness about the disease and encourage women to be screened. 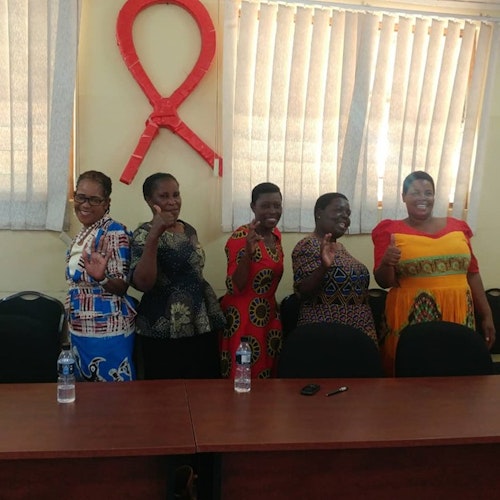 Meet the Women Who Power Go Further in Malawi These leaders use their own experiences to share the importance of cervical cancer screening, especially for women living with HIV. Read the article