An Essay by Julissa Arce, Author of My (Underground) American Dream and Co-founder of the Ascend Educational Fund

An immigrant's path toward the American dream often isn't a neat, tidy, storybook tale. Julissa Arce describes the difficult decisions, sacrifice, and hardships her family has faced along their journey.

Julissa Arce, with her mother and uncle, at her graduation from the University of Texas in 2005. (Courtesy Julissa Arce)

Let’s say the American dream is like the one in a ’50s movie: a house with a white picket fence, a Cadillac, and a perfect looking white family. I don’t fit that image because I’m a brown Mexican, but I am becoming a first-time homeowner. Isn’t that the perfect bow that neatly wraps my American dream? Isn’t it proof that the dream is real and attainable? I am killing it.

My parents came to the United States in the 1980s to sell the famous sterling silver jewelry of our picturesque hometown of Taxco de Alarćon, Guerrero. They never intended to stay. They were working in America in order to build us a home in Mexico. But life happened: a robbery on this side of the border left them deeply in debt, which was made worse by their lack of education, and by the corruption that led to the 1994 devaluation of the peso. After my little brother was born, it became clear they weren’t moving back to Mexico. The house they were building was left unfinished.

They brought me to live with them in San Antonio that August of 1994 when I was 11 years old. The tourist visa I used to enter expired three years later when I turned 14. That was my first crime — staying in America with my parents without papers. Then, there are all the documents I signed in my parents’ names because I spoke English and they didn’t. Is it forgery if they asked me to do it? I don’t know. In a few years, I would for sure break the law, but we aren’t at that point of the story yet.

In 2001, my senior year of high school, two God-sized miracles happened. First, my mom survived brain surgery after the gas tank from our roasted corn machine exploded and threw her onto a sidewalk at Fort Sam Houston, cracking her skull and sending her into a coma. Second, Texas became the first state in the United States to allow undocumented students to attend state universities, pay in-state tuition, and receive state financial aid. That’s how I was able to attend the University of Texas at Austin. That’s how the door was opened for me to pursue the American dream of a college education.

Julissa Arce advocates for the DREAM Act in front of the Capitol in Washington, D.C., in 2018. (Courtesy Julissa Arce)

But those miracles were also how the American dream became a lot pricier. I needed money for tuition, and my mom still needed a lot of expensive care we couldn’t afford. My parents moved back to Mexico with my little brother, so I could use the money from our funnel cake stand to pay for school, and our extended family in Taxco could help take care of my mom.

That same year, Senator Dick Durbin and Senator Orrin Hatch introduced the DREAM Act. It was supposed to give “good” undocumented immigrants — who came to the United States at a young age — a path to citizenship. It’s now been 20 years and the DREAM Act remains only a dream.

[The DREAM Act] was supposed to give “good” undocumented immigrants — who came to the United States at a young age — a path to citizenship. It’s now been 20 years and the DREAM Act remains only a dream.

I bought a fake green card and a fake Social Security card from a woman in a generic Texas apartment. I thought about how I had to remain a “good” immigrant to qualify for any potential relief. Getting caught with fake documents would certainly take the “good” away from me. At the same time, I thought about how unfair it all was: I had done everything asked of me, but it still seemed my only option was to work under the table and be paid in cash. How’s that for an American dream?

Miraculously, the papers worked. I didn’t get caught. I didn’t land in a detention center. I wasn’t deported and barred from entering the country. Instead, I became a vice president by the time I was 27. A few years later, I left Wall Street to become a writer. Pinocchio got to be a real boy even though he lied, and eventually I got my real papers even though I lied.

I used to be ashamed my American dream was muddled in criminality, but now I recognize the system is set up to make people like me fail. Undocumented people around America do illegal things, like work with no papers or fake ones, to make their version of the dream come true. And for this, the country screams we are illegals, while at the same time benefiting from our labor.

The majority of us don’t go on to achieve what America most wants from its immigrants — stories we can keep selling as proof the American dream is real and attainable. Stories, we go on to use against immigrants, telling them that doing it “the right way” is possible. And still, immigrants from all over the world come to the United States and remarkably survive. Somehow, we hang on to our humanity and dignity.

The majority of us don’t go on to achieve what America most wants from its immigrants — stories we can keep selling as proof the American dream is real and attainable.

My mother almost cried when I told her my husband and I were shopping for a house. With a knot in her voice she said, “Despues de tanto sacrificio, te mereces eso y más.” I knew she meant not only my sacrifice, but hers and my dad’s too. She thinks a house is the least I deserve for all the pain. My parents didn’t get to buy a home here, and they didn’t get to finish the one in Mexico. Though now, I am doing both.

My husband and I looked at properties in “up and coming” neighborhoods, places where the gentrification is not yet complete. Some of them were situated on beautiful tree-lined streets where Black and brown families walked with their strollers, some carrying babies, and others small dogs. Other houses neighbored multiple liquor stores. We drove for hours from one address to another without ever seeing a grocery store. We witnessed people buying drugs on a corner, saw kids shooting hoops in their driveway.

We found our house while driving to the last listing from our internet search. It’s a beautiful craftsman-style bungalow with fresh, green grass, and apart from the light blue fence, it looks like one of those 1950s homes. We are buying it from a white man who resides in New York. He bought the house from a Latino man for 60% of what we are paying.

But just as my dream of homeownership becomes a reality, it’s slipping further away from the people who’ve lived in our new neighborhood their whole lives. In South Los Angeles, where the population is roughly 60% Latino and 28% Black, only 31% own their home and 30% have income below the poverty level, according to the Los Angeles Department of City Planning. Nationally, the Hispanic homeownership rate is 47.5% (as of 2019, according to the U.S Census Bureau). And while Latinos are the only demographic group to see increases in homeownership in each of the previous five years, per the National Association of Hispanic Real Estate Professionals,  we still lag far behind white Americans who boast a 73.3% homeownership rate.

As my husband and I drove through South LA looking at houses, I thought about my mom. We used to drive around Alamo Heights, one of the richest neighborhoods in San Antonio, imagining what our lives would be like if we lived in one of those big houses. “One day, I promise, you’ll live in one of those,” my mom had once said. Now that I think about it, she said “you,” not “we.” Maybe she knew the dream wasn’t for her because this country doesn’t value immigrants like her; she didn’t speak English or receive a college education. But we really should, because without people like her, who leave unfinished their dreams in their homelands to come build one in America, the light here would be a lot more dim.

Without people like [my mother], who leave unfinished their dreams in their homelands to come build one in America, the light here would be a lot more dim.

Some people blame her for bringing me to America, for keeping me here after my visa expired. I was a child, and I had no choice, but I begged my mom all the time to bring me to live with her. I can never blame my parents for wanting to give me a better life. My American dream is not one handed to me by America. It is one made for me by my parents, through their sacrifice, pain, and calloused hands. Their unfinished house in Mexico is the reason I can now buy a home in the United States. 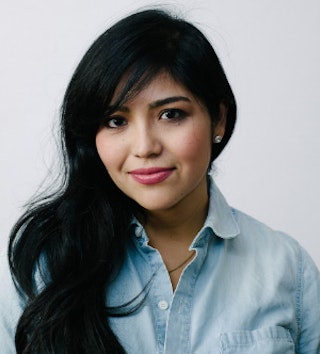