The Values of Hard Work and Servant Leadership

Major General Alfred Flowers stands at the Air Force Memorial in Arlington, Virginia, shortly before his retirement from the Air Force in 2012. (Marvin Joseph/The Washington Post via Getty Images)

Major General Alfred Flowers holds many remarkable distinctions, including being the longest serving Airman in U.S. Air Force history, as well as the longest-serving African American in all branches of the U.S. Armed Services. But also remarkable is his life story.

Flowers was born in 1947 and grew up in a family of sharecroppers. He began working in the fields of North Carolina at the age of 10. His grandparents instilled strong values and purpose early on, and at the age of 17, he enlisted in the U.S. Air Force to pursue a better life.

He talked recently with Catalyst Editor Brittney Bain about what drove his desire to succeed and how the military helped put him on the right path to pursue his dreams.

What does the American dream mean to you?

To me, the American dream is a nation that embraces diversity, equity, inclusion, dignity, and respect to all. It is an environment where equal opportunities are afforded to anyone who desires to achieve them. When I see the word “dream” in the context of America, I think of an acronym I coined: Desire, Respect, Enthusiasm, Attitude, and Motivation (DREAM).

Given this context, achieving the dream is largely in the court of desiring individuals. Do I believe everyone will find an ideal culture or environment to achieve the dream? The answer is a resounding no.

But I believe there are ways to work through, or around, challenges that appear to be roadblocks. To those who desire to achieve the American dream, I recommend they embrace my idea of the DREAM acronym and the values the letters represent.

To me, the American dream is a nation that embraces diversity, equity, inclusion, dignity, and respect to all. It is an environment where equal opportunities are afforded to anyone who desires to achieve it.

How have you witnessed the American dream play out in your own life?

The early years of my life involve not fully understanding the American dream. My early years consisted of segregation, extreme poverty, environmental and education deprivation, and very hard work on a sharecropper farm. The things I was afforded though were a lot of love, strong values training, and role modeling of the same values.

I was taught the value of service. In my environment, it was service in church, school, and the community. So, servanthood was instilled in me throughout my formative years.

I did not know what the American dream was but knew there must be a better way. I had two cousins who joined the military who were a few years older than me, and they had cars and new clothing and money, and I thought, “They have all these things I don’t have.” Because of that, and a desire to serve, I chose, with parent consent, to join the military.

There I confirmed that my grade school education was marginal, and I was not well prepared to compete for the American dream. I chose to get a better education and learn more about achieving success in a nonperfect world. This entailed full-time work and part-time school on nights and weekends. It also required less fun and more work in general.

You worked hard to achieve your dream. Do you think anyone can do that?

I believe anyone in good mental and physical health can achieve the dream. Additionally, I believe those with some handicaps can, and do, achieve it as well. I believe some less fortunate members of our society are not afforded respect and encounter less dignity sometimes though.

Attitude and motivation become major players. If you do not think you can, you cannot. If the attitude is, “everyone is out to get me,” you may be your worst enemy. We must always remember some things may not be fair, but fairness is in the eye of the beholder. It may seem we have been knocked down. We must get up, brush ourselves off, and move forward. Let us never forget that the future is not behind but in front of us.

I think there are opportunities in America that include living in democracy, freedom of choice, and the opportunity to pursue happiness. But inequality, discrimination, and lack of diversity counter the American dream. Do I believe we will ever see an America free of prejudices and challenges? No, I don't think so. However, we must try to embrace the things that make us better as a nation and strive for diversity, equity, and inclusion.

I think there are opportunities in America that include living in democracy, freedom of choice, and the opportunity to pursue happiness. But inequality, discrimination, and lack of diversity counter the American dream.

How do you think the military plays a role in achieving the American dream?

The military offers job training, education, and diversity. I do not believe I would have been as successful if I had not joined the military. The military gave me job training other than farming. It also afforded me the opportunity to improve my marginal, segregated education, while at the same time introducing me to many aspects of diversity.

I believe opportunities within the military can enable anyone who is fit to find many avenues to success. I know very few well because I spent 46 years in the military. Any time spent serving in the military will provide the opportunity to serve, educate, and help form various perspectives.

Many who join the military are products of society and come with environmental biases. However, I believe the military has and continues to lead the way with diversity, equity, and inclusion. You can achieve your dream in the military in large part because it embraces respect, attitude, and motivation.

I believe the military has and continues to lead the way with diversity, equity and inclusion. You can achieve your dream in the military in large part because it embraces respect, attitude, and motivation.

What responsibilities do think come with being an American?

These can be boiled down to dignity and respect for all. Working together, we can make it better. I believe if we would all respect each other and treat everyone as human beings, it would go a long way in meeting our responsibilities as Americans. If we live by these principles, many of the obstacles that some are facing would be removed.

As human beings, we ought to do what we can to treat each other well, respect each other, and make contributions that we can. 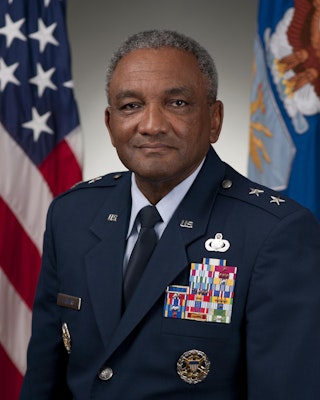